You hear about people who have one of those bad races on a big day, and they let it dictate their future, let it spin them out of control.

To be honest, I was a little worried that was going to happen to me.

I did not take any time off after the race as we still have work to do this season, but I was worried I would go one of two ways:

I went balls to the wall in that race, giving it all of my emotional energy, and as it didn’t work out, I had wasted that opportunity as I can only do that kind of effort 1-2 times a year MAX.

I thought I would struggle to find the motivation to run, and kind of be in the stage I was in last year after I had the panic attack in Cinci, where I just had no motivation to keep running until I took a break.

I would let my frustration of the race not going as planned throw me into overdrive, and I would end up overtrained and/or injured as I would just be trying to “make up for it” and prove myself.

I told you earlier this year that I finally feel like I can let go of the need to prove myself.

Thankfully, neither of these happened.

After the race, we took one week of easy running.

I was the most sore I have ever been after a half marathon, to the marathon level of soreness, and those first 3-4 days, I did not run a single mile within the 7 minute range.

Other than some downhill strides to try to wake them up midweek. 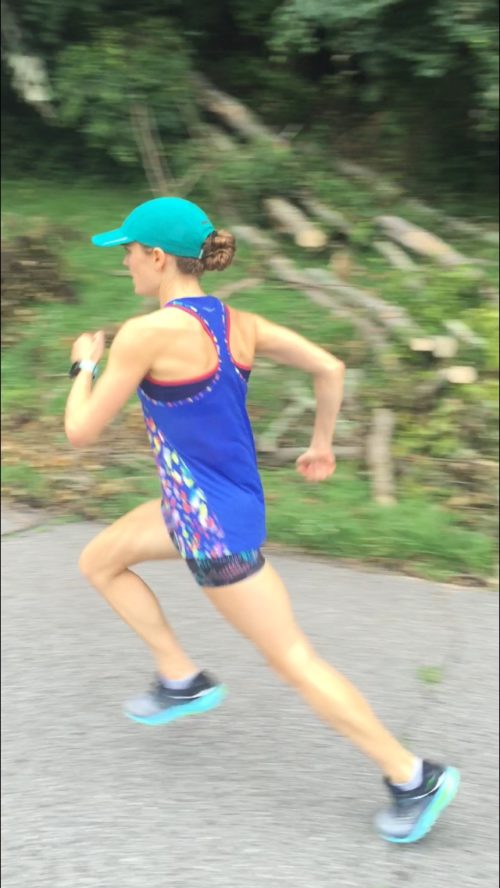 I listened to my body, and ran the pace that felt right, which was around 8:30-9 minutes per mile.

Let me also remind you, that my race pace for that race, was 5:48 per mile (if the conditions had been better I would have been trying for 5:35 per mile). Hopefully another reminder for you to keep those easy runs easy.

I felt slow, sore, and exhausted.

Remember last year I talked about how elites do lose motivation and sometimes we have no desire to run, all we want to do is count the minutes until the run is over.

That is what those first few days looked like.

But I made sure my sponsors were out in good form during this time; lots of EnduroPacks, Sizzlefish and Perfect Amino for me during those days.

On the 5th day after the race, I had a 15-16 mile run while we were in Nashville. For the first hour, I ran with Steve at the same pace I had been running the whole week, but in the second hour, a girl ended up 10m ahead of me who was running the exact same speed as me. We went for a mile with me just sitting there, but it just felt so awkward as I felt like I was too close to her.

I decided to put in a little (and yes, I mean little), surge to get past her enough to where we were not tracking one another.

But after about 800m, I felt better than I had all week. I decided to see how that felt for longer, sometimes you just need to kick the junk out of your legs.

Sure enough, as I ran, I felt more and more like myself. 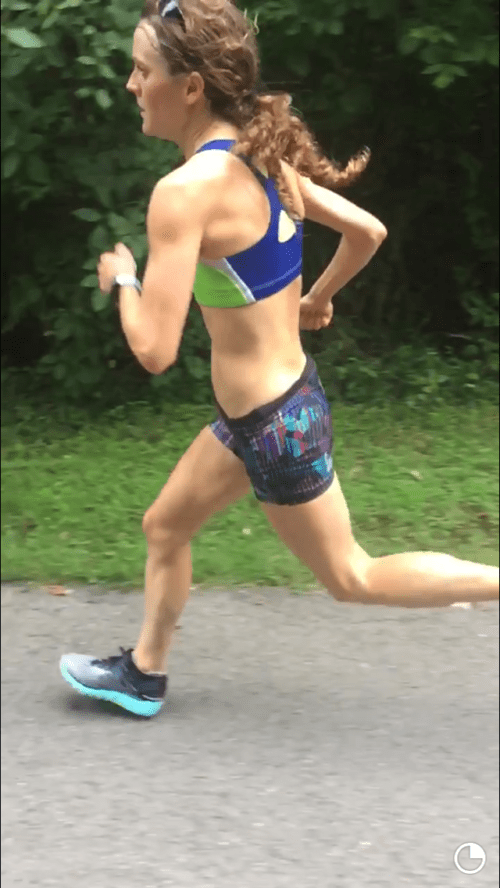 Now, I was not running fast by any means, I would probably guess that mile was an 8:00 mile, but I just realized maybe this was one of those occasions I needed to wake my legs up.

This was day 5 remember, please don’t try this the 1-3 days after your race, those days are for pure recovery!!!!

I finished that run feeling back to myself, both physically and mentally.

We did a light fartlek that weekend, pretty much just strides for 1-2 minute bursts. This was a true get-rid-of-the-junk workout, and one I would recommend for you if you are coming back from a race.

I did a long run and 8 miles worth of repeats last Thursday, which went really well, and was the confidence boost I needed.

Okay, so I have rambled on about my recovery process, hopefully given you a few pointers for your post race return to reality, but what is next for me?

Why did we not take time off after such a big race when you know I am a HUGE fan of 1-2 weeks off after races, and start building up for California International Marathon?

Well, we still have “work to do” and it’s too early.

Last years marathon proved one thing to me; a speed segment before going into a marathon segment is critical, and something we intend to do every year.

This 10 week buildup for the European Half was not enough time to build speed, especially as we were not able to do true speed sessions, as I needed to build the strength to handle a 13.1 mile race.

So after a week of pure recovery, now is the time to do that, and I have a 6 week period of speed workouts, while keeping the long runs up to 20 miles to keep that strength.

I also mentioned it is too early.

Which I think many of you may need to also consider in your future build ups.

Many of you are probably thinking:

I am not an elite, I need longer to get my body ready.

If you have been running for longer than a few years, I would argue that you do not need that extra time. Your body has all your previous marathon buildups in there, and you would be much better off giving it less time, and not risking over-training (remember recreational runners are just as likely to end up overtrained as elites!).

We like to take 12-14 weeks to prepare for a marathon, including a few weeks of buildup mileage after time off.

I encourage you to try around the same amount of time.

Off I went on a tangent again, speed work.

So yes, I am doing a speed work segment for 6 weeks (I explain why this is so important here).

I love and hate the speed work. It makes me feel so uncoordinated and like my legs just cannot keep up, BUT it is short, quick, and something different to change it up, which is fun.

My passion is back, my desire to make the most of this is strong, and the best part is, I am building off the fitness of that half marathon segment.

The race may not have gone to plan, but the training is all still in there, and I have to keep reminding myself of this. I am sure you have been the same way too. We forget that each season of running, we are building more strength in our legs, that will contribute to your future running.

Another great reminder to love that body you are in

I know I have rambled off in a load of different directions today, but I hope that you can take some tidbits and apply them to your own training.

Speed work: Love or hate it?

I am an elite runner sponsored by Saucony. I began running when I was 14, and being originally from the UK, I loved true cross country courses (the muddier the better), and I realized I was actually pretty good at it. I came over to the US on a full ride scholarship and ended up as an 11 time All-American athlete at Ferris State in Michigan. I then completed my MBA at La Salle University while being an assistant coach. Now I am pursuing some big running goals while working as the Runners Connect Community Manager and Run to the Top Podcast host. I recently ran in the World Half Marathon Championships and the European Championships for Great Britain, which has been a lifelong dream of mine, and I ran a 4 minute PR in the marathon to run a 2:37. There are a few factors that went into these accomplishments, one of which is adding Perfect Amino to my fueling plan. As a runner, what you put in your body to help with recovery can make all the difference, and Body Health has given me another way to make it nice and easy. I take 5-10 Perfect Amino either just after a workout or during the longer ones, and I know it has made a difference to how I have been able to perform and recover on a daily basis. This summer I have a few races coming up on the East Coast, and then I will be racing the California International Marathon in December.

Growth Hormone (GH or HGH) is one of the most important hormones in regard to muscle gain and fat loss for men and women:

It increases muscle mass, increases protein synthesis, strengthens bone, internally makes your metabolism “younger,” and is, to a large degree, “anti-aging” in its effects. And it does this in large part by stimulating the uptake of amino acids in the cells.

In fact, GH is so closely tied to amino acids, that not only does GH stimulate the uptake of aminos, but taking aminos stimulates the release of GH to get the cells to take in the aminos.